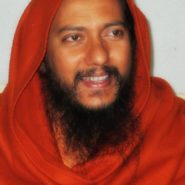 We have two selves the higher Self and the lower self. The first is our core being, the divine Self, unique and eternal; the second is the relative human self, mundane and ephemeral. The higher Self is the universal being, intransitory, ever the same like an ocean underneath, on the other hand the lower self is worldly being, transitory, ever changing like the waves on the surface of the ocean. The higher Self is unmanifested impersonal being beyond name and form, beyond time and space, and ever unborn, while the lower self is manifested personal being with name and form, within time and space, and ever born.
We all are one in the depth and our higher Self is one like an ocean underneath, our differences and divisions are only illusory and surficial like the waves on the surface. In the state of obliviousness we camouflage our higher Self with the veil of ignorance and become the lower self falling into the worldly realm becoming the doer of the worldly deeds, but in the state of mindfulness we heighten our self into the divine realm to the higher Self deattaching from the worldly realm being only the pure awareness, aloof from doership and deeds of mind and body.
Our real identity lies on the higher Self, and to identify it is the spiritual freedom, ,for to discover which we need earnest and enduring practice of meditation and mindfulness, elevating our mundane lower self to the divine higher Self realizing its true nature as one, non-doer, pure awareness, witness of mind and body, beyond name and form, beyond time and space, unborn, and eternal. This realization with firm conviction is the Self-realization.
~Sw. Chidananda Tirtha